There’s been some news coming out of New York today…how it all plays out is anyone’s guess. The big news of the day is of course the signing of Tim Kennedy, a left wing formerly from the Buffalo Sabres. According to Steve Zipay and Andrew Gross, it is expected that Kennedy will be moved to center. Which brings me to the next item.

Howlings has heard from one metsa-metz source and then read it later in a couple of places that the Rangers are about to pull the trigger on a three-for–one deal sending three forwards somewhere for on stud defenseman.

The two names out there that make the most sense in terms of the defenseman would be Tomas Kaberle and Sheldon Souray. Kaberle would likely warrant a three-for–one deal from Glenn Sather’s pal, Brian Burke.  Kevin Lowe might be asking for three, but could Sather actually believe that Sheldon Souray is worth that much? Stranger things have happened.

But let’s roll the dice here a moment shall we? And since we’re the ones writing, we shall.

Who would the three players be that other teams would want off the Rangers’ roster up front? 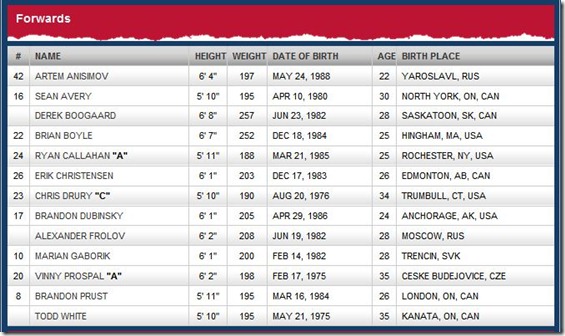 Here are the names other teams would want: Artie Anisimov, Ryan Callahan, Brandon Dubinsky, Marian Gaborik. From the prospects, Dane Byers, Dale Weise, Evgeny Grachev and MAYBE Brodie Dupont. There are even more prospects but none of them even have AHL experience so we highly doubt that any of them are going anywhere.

Of the current roster players, the only one potentially going would be Dubinsky. Gaborik isn’t going anywhere and neither is Anisimov, who is expected to be going up to one of the top two lines. John Tortorella got Ryan Callahan on the Team USA Olympic team and gave him an “A” last season. He’s not going anywhere. Of the Hartford guys, only Weise is ready for the NHL on a game-in, game-out basis. Byers is a fourth line banger and Grachev still has to prove he can play at an American League level. There’s an awful lot of hype surrounding the 20 year old Russian. Maybe they move him? Who knows?

Who would Brian Burke want? He knows Dubinsky from Team USA. He would most certainly ask for Callahan, but won’t get him. So two others? Sean Avery is despised in Toronto, but he’s certainly their type of player more than say Brandon Prust or Brian Boyle. Burke would love Chris Drury except his insane contract for the level of gas still in the tank is going to negate that. So it goes on again to the young guys. Dale Weise is far more of a Brian Burke type of player although Byers would excite the Toronto GM as well.

So would you make a Dubinsky, Avery and either Weise or Grachev for Kaberle?

What about for Sheldon Souray? Avery certainly played well for Tom Renney in the past and so did Dubinsky. But we ask you again, “Is Sheldon Souray worth three players?”

Stay tuned to see where this all goes…

Here’s the release on the signing of Kennedy.

Kennedy, 24, skated in 78 games with Buffalo in 2009-10, registering 10 goals and 16 assists for 26 points, along with 50 penalty minutes.  He recorded two multi-point performances, and registered a four game scoring streak from March 26 to March 31.  Kennedy also tallied three game winning goals for the Sabres (October 28 at New Jersey, November 30 at Buffalo and March 29 at Boston).  In addition, he appeared in six postseason games with the Sabres, recording a goal and two assists for three points, along with a plus-three ranking.

In 2008-09, the 5-9, 175-pounder, appeared in 73 games with the Portland Pirates of the American Hockey League (AHL), registering 18 goals and 49 assists for 67 points, along with 51 penalty minutes.  He collected three points (one goal and two assists) in his first game with the Pirates, a 6-3 win over the Manchester Monarchs on October 11, 2008.  Kennedy recorded a nine game scoring streak from October 11, 2008 to November 5, 2008, registering three goals and 11 assists in that span.  In addition, Kennedy skated in five postseason contests with the Pirates.

The Buffalo, New York native played three years at Michigan State University, 2005-06 to 2007-08.  He played in 113 regular season contests, recording 42 goals and 63 assists for 105 points, along with 130 penalty minutes.  Kennedy recorded the game tying goal and an assist on the game winner as Michigan State defeated Boston College in the 2007 NCAA Championship game, and was named to the all-tournament team in the Midwest Regional and the Frozen Four.  He led the Spartans in scoring in both 2006-07 and 2007-08, recording 43 points in each of the two seasons.

4 responses to “Lots of news…”