AND THEY’RE OFF…IN MANY WAYS

The 2011-2012 season is underway and it starts with a thud as the team blows an early 3-1 lead from a Kris Newbury hat trick in the first 21:09 of the game and they went on to get doubled-up by the Adirondack Phantoms 6-3 at the Glens Falls Civic Center Saturday night.

Everything was looking bright for the Whale right from the open as they pounced on Adirondack netminder Michael Leighton just 37 seconds into the game when Tomas Kundratek sent a pass from the right corner to Newbury in front of the crease and the puck found it’s way through the five-hole and into the back of the net.

For Leighton, a Stanley Cup finalist just two seasons earlier with the Flyers, it was a tough start, but the veteran would eventually settle in and close the door on the New York Rangers top affiliate.

Brayden Schenn, the Los Angeles Kings’ first round draft pick (fifth overall) in the 2009 NHL entry draft and part of the package that sent former Flyers captain Mike Richards to LA-LA Land, was past dominant in this one. Every shift it seemed that Schenn was making a big play somewhere.

At 9:21, Schenn led defenseman Oskars Bartulis, also just sent to the AHL from the big club, on a 3-on-2 and fed the Ogre, Russia native for a shot from the slot. Bartulis’s shot hit the stick of Whale d-man Jared Nightingale and went over the glove of Whale starter Cam Talbot to even the score.

Nightingale made up for the inadvertent deflection less than three minutes later when his madman rush up the left wing side around Mike Testwuide. The puck was put on net and bounced out in front to Newbury who was Johnny-On-The-Spot and flipped the puck into the back of the net at 12:15.

The first period ended with the Whale and Phantoms deadlocks in shots at eight each, but the Whale were clearly in command of the game.

Newbury completed his second career hat trick, the first coming while he was with Toronto, ironically enough, against he Hartford Wolf Pack, when he reigned in a shot pass from deliberately sent off the back wall by John Mitchell from the right point to Newbury on the left side of the crease for the easy finish. It was a power play goal set up by a Kevin Marshall high stick that came with just 3.3 seconds left in the first.

It was 3-1 and the Whale spent the rest of the game as spectators.

Less than two minutes later it was 16 year veteran Denis Hamel who brought the Phantoms within a goal when he deflected a Cullen Eddy shot from the right point that got past Talbot (18 saves, 0-1-0-0) as well.

But then Schenn allowed the Adirondack team record of 4,521 in attendance to see why he is such a valuable NHL star of the future. He just took over the game.

At 11:11 of the second frame Schenn made a hard attack of the net and picked up his own rebound and sent the puck to the point to Hamel who found Marshall alone on the left point. Marshall ripped the black out of the vulcanized rubber as his wrister beat Talbot over the blocker to knot the game at three.

The Whale had excellent scoring chances at 12:59 when Newbury’s pass to rookie Jonathan Audy-Marchessault and subsequent shot was denied by Leighton.

At 16:23 much heralded rookie Carl Hagelin skated away from Leighton and stared at the ceiling when his shot was stopped off a three-on-one odd man rush.

The turning point of the game came 37 seconds later when newcomer, veteran Andre Deveaux, made a bone headed pass up the slot that would wind up in the back of the net. Deveaux’s pass was summarily intercepted by Phil Kessel’s brother Blake who found Shane Harper who found who sent it across to Luke Pither who in turn fired the biscuit past Talbot for his first of the season. Nightingale, who had lost his stick and was bent over picking it up in front of Talbot picking it up, never saw the play unfold, It’s highly probable that Nightingale likely didn’t figure that a play was coming right back at him given the relative safe position Deveaux was in in the right corner or that it’s a fundamental lesson for young kids not to pass the puck like that. Awful.

Kyle Wellwood’s brother Eric added a power play goal to make it 5-3 at 7:22 of the third and Testwuide added an empty netter with 6 seconds left for the final tally.

“I think we took a step back and kind of sat on the lead, so in the future we have to work on putting the pedal down and stepping on their throats,” Newbury said. “It’s the first game of the year so we can take it as measuring stick. There are a lot of things to work on because it’s so early, but the good news is we’re going to get back at it tomorrow (in Wilkes-Barre, Pa.) and hopefully get a win on this trip.

“I think we’ll mention some things before the game tomorrow, but the most part, the older guys maybe made too many mistakes. The younger guys played well and created good energy, but us older guys have to take responsibility and make better plays and better passes in our own end.”

Head Coach Ken Gernander’s press conference and reaction to the game is below as are comments form Adirondack Head Coach Joe Patterson.

Bruce Berlet has his story here on Howlings.  For the Adirondack perspective we have Tim McManus with the coverage at the Post Star. 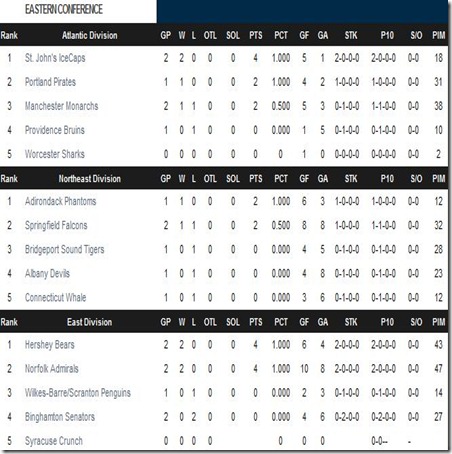 SOUNDS OF THE GAME:

* 4,521 was the largest attendance in the Phantom’s short history.

The Whale are back on the air Sunday at 5:05 as they travel to Pennsylvania to meet up for the first time with ex-Wolf Pack / CT Whale and XL Center fan favorite Devin DiDiomete and the Wilkes Barre / Scranton Penguins. Bob Crawford will have the broadcast with the pre-game show starting at 4:35 at WCCC.com.

Too far away or can’t make it? Listen live at WCCC.com or from your cell phone or computer visit www.twitter.com/howlingstoday for complete live in-game coverage of all games both home and away.