ANOTHER CHARACTER WIN FOR WHALE

Posted on December 3, 2011 | Comments Off on ANOTHER CHARACTER WIN FOR WHALE

Say what you will about the 2011-2012 version of the Connecticut Whale, but this is a team of character. They find ways to win late; they find ways to win games early, they can win games ugly and they can win games like they did Friday night when they visited the Dunkin Donuts Center in Providence, Rhode Island and in front of a good crowd of 7,352 just beat up the last place Bruins 4-1 with a total team effort from the net on out.

Chad Johnson, (28 saves, 7-3-2) was the games first star making several strong stops and only a shot that he had no chance on, a short-handed Zach Hamill third period goal was able to get by him.

“I thought Johnner (Johnson) had a good night tonight,” Whale head coach Ken Gernander said to the media afterwards. “A lot of times your best penalty killer is your goaltender.”

And being the team’s best penalty killer was especially critical Friday night as the Whale were shorthanded seven times and kept the Bruins off the scoresheet all seven times.

You can never underestimate the contributions of the fourth line on a team like the Whale are evolving into as Jordan Owens centered Tommy Grant on the left and Scott Tanski on the right and they were probably Gernander’s best line all night.  The trio combined for four points (2g, 2a) and was highlighted by Tanski’s first professional goal scored in the first period on a deflection of a Jared Nightingale shot from the right point past Anton Khudobin (22 saves, 7-11-1). Tommy Grant scored what would prove to be the game winner in the second period, his third of the season, streaking up the slot and taking an Owens feed and drilling it past Khudobin.

Owens, who returned to the Whale in the off-season after being traded in March 2010 for (ironically enough) Kris Newbury. The 25-year old Toronto native had his best all-around game of the season. He had two assists, duplicating his effort from Tuesday night when he had two apples against the Hershey Bears. But more than that, Owens was all over the ice with relentless pursuit of the puck on the forecheck and was a stalwart on the team’s seven penalty kills.

Gernander put it in his own indelible way saying after the game that,  “the Owens, Tanski, Tommy Grant line had two big goals to start the game for us… we’ll take them from any source.”

Mats Zuccarello also had a strong night and was named the game’s second star. “The Norwegian Hobbit” scored the games final goal on a well executed 5-on-3 goal firing a Jonathan Audy-Marchessault set-up pass from the left side right to his stick on the right side of the crease. For Zuccarello, it was essentially an empty net as the play on the left side of the crease took Khudobin down and out.

Kris Newbury returned to the lineup after serving a four game suspension for his hit to the head of Justin DiBenedetto on November 18th at the XL Center and also had a pretty 5-on-3 tally.

The game was a character statement for this Connecticut Whale team who played without Carl Hagelin and John Mitchell who are still on recall in New York. But the team pulled together and put a strong performance on the ice again in their absence.

If they are going to carry the day when the Whale who are seeking their fourth straight win both overall and it will come against a strong  Springfield Falcons team Saturday night at the MassMutual Center. If they are going to win they must learn from Friday’s contest and they must STAY OUT OF THE PENALTY BOX. Friday the PK was as strong as it gets stopping all seven Bruins power plays.

“Both special teams [had a good night], we had two power-play goals and several kills tonight, fortunately.  We don’t want to take so many penalties, though.” Gernander said.

What passes for coverage of the P-Bruins can be found on their website. 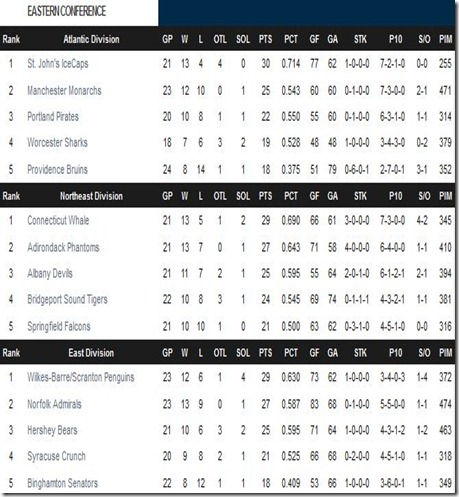 * Chris McKelvie didn’t get to have the Bourque experience in Friday night’s tilt because he was scratched. His brother Zach McKelvie is on the Providence roster and played.

* Providence entered the game last in the AHL in offense and 25th in defense.

* Every player on the Whale roster has at least one point.  Audy- Marchessault leads the team in scoring (7g, 12a 19pts) and obviously is tops among forwards. Brendan Bell (3g, 5a), Blake Parlett (2g, 6a) and Tim Erixon (1g, 7a)  all with eight points among D-men.

It’s back to Springfield for the Connecticut Whale as they look to stretch the three game winning streak to four  against the Falcons who they have beaten all three times they’ve played this season. Bob Crawford will be on the air with the broadcast from the MassMutual Center starting with the pre-game show at 6:50pm on WCCC.com.

Too far away or can’t make it? Listen live at WCCC.com or from your cell phone or computer you can get all the live action via our Twitter page: @HowlingsToday for all games both home and away.