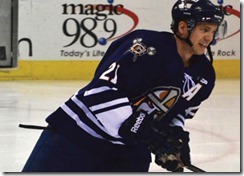 The Greenville Road Warriors, in conjunction with the ECHL, announced today that center Justin Bowers has been named to the All-ECHL Second team.

This season Bowers has established new club records for points (77) and assists (58) in a season and continues to add to those totals. He is also the team’s all-time leader in points at 174 and counting. Bowers is tied for the league lead with 58 assists and is third in the league with 77 points. He leads the ECHL with 25 power-play assists and 32 power-play points. Bowers, who was named ECHL Player of the Month for January, also appeared in two American Hockey League games with Milwaukee.