Posted on October 1, 2011 | Comments Off on SHARKS JUMP WHALE AT QUINNIPIAC

Hamden, CT, September 30, 2011 – The Connecticut Whale were defeated by the Worcester Sharks, 2-1, Friday night in AHL preseason action at the TD Bank Sports Center at Quinnipiac University in Hamden, CT.

Despite outshooting their opponent by a sizable margin for the majority of the game, the Whale could not convert many of their chances.

A two-goal flurry by the Sharks’ Ryan Del Monte and Nick Petrecki in the early stages of the second period sank the Whale, who fell to 1-2 in preseason contests this season. Jared Nightingale scored the only goal of the game for Connecticut.

“Early on, we had a good pace to our game, good tempo,” said Whale head coach Ken Gernander. “We got shots, not necessarily lots of chances but pressure, and (the Sharks) didn’t really generate a lot. But then they get two quick goals and it looks pretty good for them.”

The Whale and the Sharks played to a scoreless first period, despite Connecticut being afforded five power-plays by Worcester and outshooting their opponent, 7-1.

Worcester came out with more attack in the second, as they scored twice within a span of less than a minute to take a 2-0 lead. Del Monte was given credit for the Sharks’ first goal, which hit off a skate trickled past Whale goaltender Chad Johnson (15 saves) on Worcester’s first power-play of the night at 3:36.

“The one power-play goal was tough,” said Gernander. “It was a rebound that went off our defenseman’s skate, then we had a turnover in the middle of the ice for two quick goals.”

Just 28 seconds after Del Monte’s goal, Petrecki beat Johnson for the 2-0 lead with an unassisted score, as he picked up a Whale turnover.

“It is what it is, you capitalize on your chances. It’s a game of inches, or there’s momentum swings,” said Gernander, of the quick lapse.

The Whale finally broke through at 15:11 of the third period on a slap shot by defenseman Jared Nightingale, which went through a crowd in front of the net and eluded Worcester goaltender Tyson Sexsmith (21 saves).  A penalty taken immediately after the goal, however, seemed to dull Connecticut’s momentum and they could not come up with the equalizer.

The Whale will conclude their preseason slate with a game against the same Worcester Sharks, Sunday at Cromwell’s Champions Skating Center (2:00). Connecticut will begin the regular season on Saturday October 8, when they head to Glens Falls, NY to face the Adirondack Phantoms.

Comments Off on SHARKS JUMP WHALE AT QUINNIPIAC

VARSITY AND JV BOTH WIN 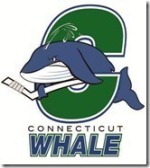 Saturday hosted one of those rare nights where both the NHL and their AHL affiliates would squared off on the same day. The AHL Connecticut Whale did their part with a 4-2 victory, their fifth in seven tries, against the Worcester Sharks. After that game concluded, some three hours later the parent New York Rangers went on to beat the San Jose Sharks in a shootout 3-2.

END_OF_DOCUMENT_TOKEN_TO_BE_REPLACED

Comments Off on VARSITY AND JV BOTH WIN

A NIGHT OF FIRSTS

The New York Rangers entire organization is in full fledged youth movement mode. If John Tortorella is the Chief Architect then Ken Gernander is the Master Builder.

For some of the building blocks in that future foundation, Wednesday night found them both in having big nights in places they didn’t expect to be when the season began.

END_OF_DOCUMENT_TOKEN_TO_BE_REPLACED

Comments Off on A NIGHT OF FIRSTS

Hartford, CT – The Connecticut Whale came into Saturday night’s contest with the visiting Worcester Sharks looking to build off a strong win in Providence the night before. Boy did they ever, as 5,060 witnessed one of the grittiest and most stirring come from behind victories in team history. The XL Center was jumping as the Whale put together their best effort of the season overcoming three separate one-goal deficits and went on to win it in an exciting shootout 4-3. END_OF_DOCUMENT_TOKEN_TO_BE_REPLACED

Comments Off on NOW THAT’S HOCKEY

What a difference a day makes…well not even a day.

The Hartford Wolf Pack could not get out of their own way Sunday afternoon and just like last season and just like the night before kept a steady march into the penalty box and it cost them losing 4-3 in a game who’s score was a lot closer than the game was.

While Saturday had a energetic, lively crowd, Sunday afternoon’s matinee oroved just how much damage has been done to this franchise’s fanbase over the last three yeasr especially. While the “crowd” was announced 2,912, the building appeared to have FAR less than that. It’s a good thing too, because of enough people had seen the effort, of lack thereof, in the first period they might not have come back.

You would think with a ten that has ten players out of twenty-three that have less than a year of Americah Hockey League experience they might get into some penalty trouble adjusting to the new league; that wasn’t the case. It was the veterans who put the team behind the eight-ball.

Just 2:25 into the first, Justin Williams, who signed with the Wolf Pack as a free agent over the summer after having a career year with Grand Rapids last season, (32 goals, 31 assists, 63 points) took a lazy hooking penalty. The Wolf PAck paid the price just 1:02 later when Benn Ferriero potted a rebound off a Nick Schaus shot.

Less than a minute after that, Kris Newbury went to the box on an unsporsmanlike conduct penalty. This one however didn’t cost them.

But rookie standout Ryan McDonagh picked the wrong player to leave alone in front of goaltender Chad Johnson. Jonathan Cheechoo, who in 2005 had 56 goals with the parent San Jose Sharks, was left unchallenged by the young defender and it cost them. Cheechoo redirected a Justin Braun shot from the top of the right circle over the glove of Johnson (1-1-0, 20 saves) at 11:27.

1:12 after that, the soon-to-be Connecticut Whale dug themselves a deeper hole as veteran Brodie Dupont too ka slashing call putting the team in another shorthanded sitaution only to be exacerbated by Newbury when he took a high sticking call 1:28 into the penalty kill giving the visiting Sharks a 32 second two-man advantage.

26 seconds later, it was a three goal disadvantage as Ferriero got his second power play goal of the first period when his weak shot in front slid between Johnson’s pads, a goal he would most certainly want back.

The first period ended with Worcester dominant in every capacity and led 3-0 in goals and 11-3 in shots.

There was no viable explanation for the total lack of even showing up in the first period, but one thing was for certain, Head Coach Ken Gernander was not a happy man.

Gernander shook up his lines and shortened his bench a bit to start the second period and while it seemed like the bleeding had stopped in terms of goals-against, the parade to the penalty box didn’t. By 9:23 of the second, when Justin Williams took his second call of the game, a boarding call, the Pack had been shorthanded six times.

The Pack goal silence ended in a big way with 3:31 remaining in the period when Evgeny Grachev scored for the first time in thirty games. Kelsey Tessier took a shot from the left circle that went up and over Shark goaltender Alex Staylock (1-0-1, 30 saves). Grachev had inside position and as both he and Staylock  went to hit the puck, Grachev got his stick slighly in front and put it into the net.

The Pack would get one other solid scoring chance with just 14.7 seconds left in the second period.  Grachev again got in front of the net only to have his shot erased by a flash of Staylock’s glove.

Another shifting of the lines in between periods by Gernander and in the third period, it bore some mixed results.

Just 2:54 into the final frame, a terrific forecheck by Pack captain Dane Byers, Grachev and Tessier led to Byers coming up with the puck along the right half-boards. Byers turned and saw Tessier all alone in front of Staylock. The Fredericton, New Brunswick native took a backhanded pass from Byers and knocked it past Staylock to cut the lead to 3-2.

But it was penalties agian that would doom the Wolf Pack.

McDonagh got beaten to the outside by Cheechoo on a breakaway and was forced to take a holding call while chasing him down. It put the Pack down a man for the seventh time and it would cost them what would prove to be the game winner.

After Grachev got knocked down hard in teh offensive zone and didn’t get up quickly enough, James Marcou came up the ice unabated and was able to easily redirect a Cheechoo, who was just everywhere in this one, centering pass from the right corner up and over Johnson’s glove.

The Pack did get other chances even down two goals.

Hartford got a late power play set up by Worcester defenseman Nick Petrecki‘s cross-checking penalty call. However Dale Weise was unable to convert a thread-the-needle pass from the right side to the left of the crease where he had an empty net after sneaking behind the defense.

The frustration for Weise boiled over at the next stoppage in front of the Shark net. When Sean Sullivan put him in a headlock, Weise erupted and just pummelled the Shark defenseman. With less than five minutes to go, it ended his night.

The Pack continued to put pressure on the Sharks defense but the puck just could not get in the net. Not even a stuff in chance for Byers could find it’s way over the goal line.

After a skirmish with 16.7 seconds left that sent Dupont and Petrecki to the showers a bit early for a fight of sorts, the Pack made it a one-goal differential.

Newbury won an offensive zone face-off back to Wade Redden who fed Tessier down deep behind the Shark net. From behind the goal line, Tessier threw the puck in fornt and in all the scramble in front the puck went in off Staylock’s skate giving the rookie a three-point, two-goal night.

Redden’s assist was his third in two games after spending 13 years and 994 games with the Ottawa Senators and New York Rangers.

The Wolf Pack will have plenty of time to work on correcting these early problems. The team will have Monday off and then start practicing again until Friday night when they start a three-games-in-three night road trip starting in Albany against the Devils, moving to Bridgeport Saturday against the Sound Tigers and then finishing up Sunday against Providence.

The Harford perspective as always was written by Bruce Berlet and can be found at Hartfordwolfpack.com. Gerry Cantelon writes at eurohockey.net. Bill Ballou has the story from the Sharks perspective at Telegram.com.

SOUNDS AFTER THE GAME:

* The XL Center was flush with NewYork Rangers executives taking in the game. Assistant General Manager Jim Schoenfeld looked none too happy as he headed down to the locker room between periods. Goaltending guru Benoit Allaire was on hand as was capologist Cam Hope and Director of Player Personnel Gordie Clark.

The Wolf Pack have time to fix what looked broken this week before three-in-three on the road. Friday the team is in Albany to take on the Devils at 7 Bob Crawford is on the air at 2:30pm.

Too far away or can’t make it? Listen live at WTIC.com or from your cell phone or computer visit www.twitter.com/howlingstoday for complete live in-game coverage.

Comments Off on NIGHT AND DAY