A NEW FACE IN GREENVILLE

GREENVILLE, SC – The Greenville Road Warriors announced today that they have acquired the rights to Ryan Hayes from the Trenton Titans in exchange for the rights to Matt Schepke.

Hayes, 22, is entering his second season of professional hockey in 2011-12. As a rookie with the Trenton Devils last season Hayes posted 50 points (23G, 27A) in 63 games along with 47 penalty minutes. He was the top scoring rookie on the Devils, second overall on the team, and the sixth-highest scoring rookie in the ECHL. A 5-9, 180-pound forward, Hayes attended the New Jersey Devils prospects camp last summer after finishing his junior career with the Plymouth Whalers of the Ontario Hockey League.

END_OF_DOCUMENT_TOKEN_TO_BE_REPLACED

Comments Off on A NEW FACE IN GREENVILLE 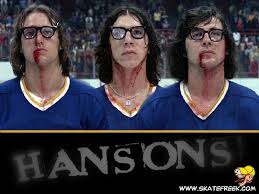 Steve Carlson is part of the answer to one of the great trivia questions in sports history.

Who are the two players to be on the same team as Gordie “Mr. Hockey” Howe and Wayne “The Great One” Gretzky?

Amazingly, both played for the World Hockey Association’s New England Whalers. You have one answer, so what’s the other?

END_OF_DOCUMENT_TOKEN_TO_BE_REPLACED

Comments Off on HANSONS SPEAK

FROM THE CREASE with Bruce Berlet

Posted on December 27, 2010 | Comments Off on FROM THE CREASE with Bruce Berlet

Athletes often have unique ways to get involved with the sports that they love.

Nick Evlampios Fotiu got plenty of enjoyment from football, soccer and boxing while growing up in Staten Island, but a bit of divine intervention helped the rugged New Yorker develop a desire to play hockey.

Fotiu loved the New York Rangers so much that he would follow their every move and spend more than an hour each way taking a bus, a ferry and a train from his home to Madison Square Garden, where he would sit in the cheap “blue seats” in the upper reaches of The World’s Most Famous Arena.

And on Sundays, Fotiu would stop in Greenwich Village to visit his grandmother for a pasta dinner and then travel to MSG to watch a team that occasionally challenged for the Stanley Cup but didn’t win pro hockey’s most cherished prize for more than half a century.

Comments Off on FROM THE CREASE with Bruce Berlet